Xiaomi have updated their M365 Pro electric scooter as part of their new range of scooters. Having dropped the "M365" moniker entirely, the new scooter is simply called the Xiaomi Pro 2. So far, so straightforward. But what are the differences between the M365 Pro and the Pro 2? Let's take a good look at the Xiaomi Pro 2 electric scooter to find out. You can also compare the Pro 2 with the 1S. 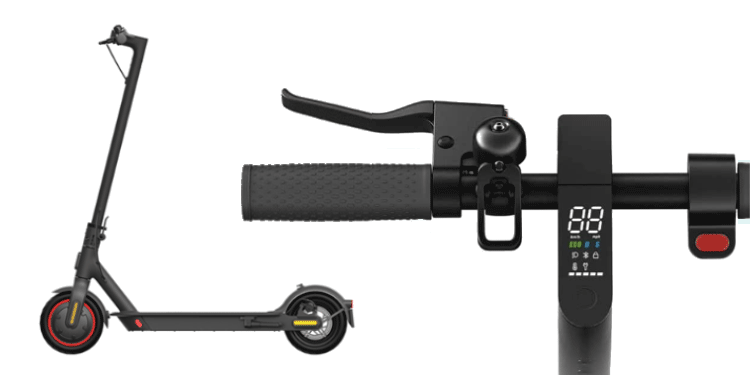 The Xiaomi M365 Pro was released in 2019 as an alternative to the original M365 (released in late 2016). The M365 had come to prominence in Europe in 2018 when scooter hire company Bird put hundreds on the streets of cities across the continent. In April 2020, it was revealed that Xiaomi would be updating the M365 and M365 Pro with the Essential, 1S and Pro 2. After a massive scramble to find space on cargo ships leaving China after the Covid-19 hiatus, they finally hit the UK in August 2020.

The Xiaomi Pro 2 is a foldable electric scooter designed by Chinese tech giant Xiaomi (pronounced "show-er-me"). It is manufactured by Ninebot, who also manufacture their own e-scooter (under the Segway brand). Like its predecessor, the Pro 2 has a simple folding design, 45 km (28 mile) range and 25 km/h (16 mph) top-speed. It also boasts cruise control, front and rear lights, E-ABS brakes, the phone app (the Mi Home app seen below) and pneumatic tyres. The frame is also basically the same as the M365 Pro (the base is bigger than the M365 to allow for the bigger battery - I think it is disingenuous to claim it is for "extra comfort").


The handlebar height is not adjustable because of the folding system (part of the bell hooks on to the rear mudguard). It comes in a bespoke white/black box (weighing 19 kg) and requires a small amount of self-assembly, inasmuch as you have to insert the handlebars and screw in four screws to fix them in place (so as to avoid an awkwardly large box for shipping). The box also includes a spare tyre.

The scooter's battery is located in the base and the frame itself is built from aluminium. It feels strong and the folding mechanism means it can be folded or unfolded in a few seconds (Xiaomi claims three seconds). This battery, sturdiness and low cost (as you are not paying for carbon fibre) does mean it is reasonably heavy at 14.2 kg. Simply put, there is a direct correlation between a scooter's range and its weight. One difference from its predecessor, apart from yellow reflectors on the EU/UK model, is that the external wires are neater in the Pro 2. It still seems a little odd that they need any external wires but they have addressed the issue to some degree (though I would not leave my scooter anywhere where unruly kids with pliers could make your scooter unrideable).


The accelerator is a button on the right-hand handlebar, while there is a bike-like brake on the left-hand side, as well as a slightly superfluous bell (which cannot be removed if you want to fold up your Pro 2). A powerful LED light is built into the front of the handle for nighttime riding - or wasting power in daylight. Some have complained this light is too bright on the Xiaomis, but I disagree.


As with the M365 Pro, the Pro 2 is distinguished from the less powerful Xiaomi scooters by having a red ring on its front wheel. The Pro 2 is then distinguished from the M365 Pro with the yellow reflectors found on the new range of Xiaomi scooters. It is unclear whether the yellow reflectors are unique to the EU/UK versions (as the first Chinese version of the 1S still had red ones). 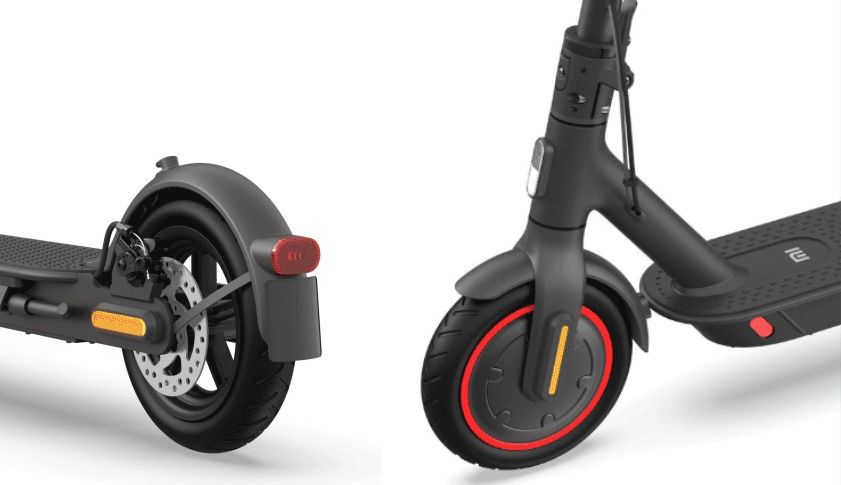 Like the M365 Pro, the Pro 2 is well-balanced and easy to control (as long as you are not performing a tight turn). If you are not used to riding scooters or skateboards, the first time you ride any e-scooter is likely to be a little nerve-wracking (I was super nervous the first time I hired one in Paris in the summer of 2018). Most people quickly lose any initial trepidation. With a low centre of gravity, accelerating and braking are easy and effective. One problem I have encountered riding my personal M365 is that the right-hand handlebar grip can get pushed up to the throttle, meaning the throttle may not automatically spring up when released.


The Xiaomi tyres are 8.5 inches in diameter and pneumatic. The idea is that air-filled tyres makes the ride smoother. However, there is no suspension so it is really a trade-off between the two options. The ride is indeed smooth as long as the ground itself is reasonably level. I have ridden Xiaomi scooters and Segway scooters extensively in Mexico City, where road repairs fall pretty low down on the "to-do" list, and found that, as long as major potholes are avoided, and a comfortable riding stance taken, most road surfaces can be comfortably traversed. But tackle cobble stones at your own risk.

The most annoying issue I have found with the Xiaomis is a tendency to scrape the bottom of their scooters on pavement edges when I go from the road to pavement or vice versa. You could argue that this is perhaps a result of my laziness and I am simply not lifting it high enough off the ground. I suppose it a little bit like driving a limousine with a long wheelbase - you have to be aware of it.

We would always recommend wearing a helmet when riding an electric scooter. Most scooter injuries seem to happen when a pothole (or similar) is encountered and the smallish wheels are indeed susceptible to such obstacles. Please read my post Are Electric Scooters Safe? for more information and statistics on the safety of electric scooters. As we often point out, as of May 2022, it is not legal to ride privately owned electric scooters on public roads in Britain, although few police forces take any action against riders.

The Pro 2's battery has the same capacity and power as the M365 Pro battery and it retains the same top-speed of 25 km/h (15.5 mph) and range of 45 km (28 miles). The range is pretty accurate but the top speed is not usually quite hit. The improvement in battery is, according to Xiaomi, more subtle than that and allows for a faster charge time (8 hours) and longer overall lifespan (which is perhaps more important). It is worth noting that once the battery level drops below 5% the scooter performance drops too.

Like the M365 Pro, the Xiaomi Pro 2 is hard to beat for its price, but it does feel as if Xiaomi could have upped their game a bit more: there is not a great deal of difference between the two (though those who have struggled with changing a tyre will welcome the new tyres). Having said that, it is hard to know how much better the battery lifespan is and, with its reasonable pricing and long range, the Pro 2 will be very popular in the UK. It is perhaps a little unfair of me to detract half a star by comparing it to its former incarnation.

YOU CAN BUY THE XIAOMI PRO 2 HERE