The Ninebot-Segway Max G30 (often just called the Ninebot Max G30) hit the UK in late 2019 and immediately caught the attention with its ridiculous range of 65 km (40 miles to the likes of me). My immediate thought when I first saw it was, "wow, that looks a lot like the Xiaomi scooters. I mean, a lot". Part of my surprise stemmed from the previous Ninebot-Segway models being quite distinct.

For instance, the ES1 and ES2 had their batteries in the stem, electric button brakes and no external wires. My surprise was slightly tempered by the knowledge that Ninebot also manufactures the scooters for Xiaomi (see this explanation). There are small differences but the Max G30 is really a Xiaomi Pro 2 with an even bigger battery. But let's have a look at the Max G30 in more detail.

As you may have read in other scooter reviews on this website, there is currently a close relationship between the range (in miles) of the scooter and the size and weight of the scooter. This will remain the case until battery technology changes fairly drastically (the technology is actually already there, it is just whether companies - and consumers - are willing to pay to license it). So the next thing to note about the Max G30 is that it's a bit of a beast. It's 4.5 kg heavier than the Xiaomi Pro 2, as well as generally bigger. For me, this is getting beyond a comfortable carrying weight but perhaps its long range negates the need to take it on public transport.

The Ninebot-Segway Max G30 is a foldable electric scooter designed (theoretically) by Segway, the well-known American company that was bought by Chinese firm Ninebot in 2015. As mentioned, Ninebot manufactures the Xiaomi scooters too. Segway had a head-start on both Ninebot and Xiaomi when it came to personal mobility products, both in terms of technology and brand awareness, but Ninebot has a clear strategy of using the Segway name to advance the Ninebot brand (and I am sure the Segway name will eventually vanish).


The Max G30 has a simple folding design (more similar to the Xiaomis than earlier Segway scooters), 65 km (40 mile) range, 25 km/h (16 mph) top-speed, 18.7 kg weight, and 10.5 inch pneumatic tyres. It also boasts front and rear brakes, regenerative power via the rear brake, front and rear lights, a colour dashboard, and a dedicated phone app (seen in the image below), called "Segway-Ninebot" just to confuse matters further. It comes in a black box (I guess they decided the white box used for the ES2 was not that practical) and requires a small amount of self-assembly (or it would need an awkwardly large box for shipping).

The Max G30's huge battery (it's really a series of smaller batteries) is located in the base and the frame itself is built from aluminum (or an alloy thereof). It is strong and the folding mechanism means it can be folded or unfolded in a few seconds; though, with its weight making it much less portable than the ES2, I cannot see many situations where you would need to fold it.


The LCD display on the Max G30 is the same as the one found on the Xiaomi Pro 2 (and before that the M365 Pro). Ninebot have clearly decided to consolidate manufacturing so that we are now, essentially, getting variations of the same scooter from both Xiaomi and Ninebot-Segway. The dash shows your speed, battery level and mode, as well as things like bluetooth.


The accelerator (throttle) is a button/switch on the right-hand handlebar, while there is a bike-like mechanical brake on the left (when I design an e-scooter, it will have two accelerators so that you don't have to slow down to signal). The bell is integrated into the handlebars, which make it somewhat neater and cooler than the ES2 and Xiaomis, while there are the various reflectors as well as the lights. The rear light is more built-in too, making it less vulnerable. It does of course also have a kickstand. 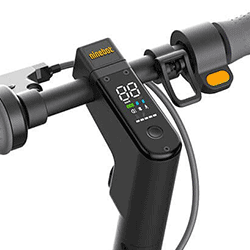 The G30 is a rear-wheel drive scooter with air-filled 10.5 inch tyres. These bigger wheels mean it is perhaps a bit smoother than both the Xiaomis and the previous Segway-Ninebot scooters. The tyres are designed so that they are less likely to puncture (this it not something I ever encountered with the Xiaomi M365 but understand it was hard to change the tyres). The G30 seems to excel on hills: the rear-wheel drive presumably helps - with a stated climbing angle of 20%. This is somewhat confusing because a climbing angle in percentage is different from a climbing angle in degrees (20% is about 11 degrees).


Below is the advertising image Ninebot use to represent the climbing angle. They have taken a bit of a license with this as the angle shown is clearly more than 11 degrees. Indeed, they seem to have confused percentage with degrees (the marketing team must not have got the memo) as I make the angle below 20 degrees (which is 35%). However, you are unlikely to encounter many hills in a daily commute that the scooter cannot handle. 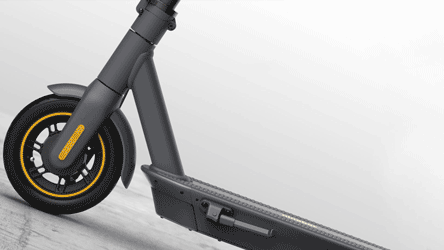 Ninebot talk about an electronic brake, which is a little confusing when the brake you can see is clearly mechanical. However, what their hidden "electronic brake" does is prevent you from going over the (arbitrary) top-speed even if you are going downhill. I say arbitrary because the scooter's top speed has been set at 25 km/h for safety/political reasons and is not the top speed such a powerful (in terms of Watts) battery should be capable of achieving. The stem is a little longer than the ES2, meaning it is more definitely an adult scooter.


The advertising video for the Max G30 shows a couple riding G30 scooters over cobble stones along the Seine in Paris, and smiling as they do so. The smiles look pretty painful and reminded me of the beach scenes in Mamma Mia (a rip-off of Buona Sera Mrs Campbell), which were obviously filmed in less-than-warm weather. So let's be honest, the ride is smoother than most scooters but I have ridden on those same cobble stones on the M365 and do not believe that the G30 really makes traversing such surfaces a smiling affair. 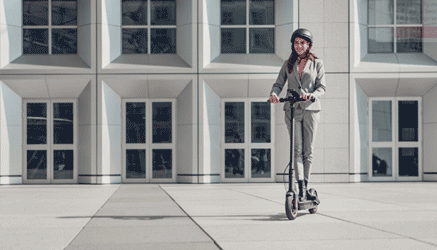 We would always recommend wearing a helmet when riding an electric scooter. Most scooter injuries seem to happen when a pothole (or similar) is encountered and the smallish wheels are indeed susceptible to such obstacles. Please read my post Are Electric Scooters Safe? for more information and statistics on the safety of electric scooters. As we often point out, it is currently not legal to ride privately owned electric scooters on public roads (and pavements) in the UK, although we expect this to change in the near future.

The 551 Wh battery is what separates this scooter from the Xiaomis and the ES2. That is pretty massive. However, it is important to remember that Watt-hours are a measure of energy and not power. The power (Watts) is similar to the ES2, which mean all the extra battery goes into extending its range rather than its speed. The range has been tested by other reviewers, who have found it to be accurate. The relatively short charging time of 6 hours is impressive. Below is a snazzy representation of the regenerative braking system.

The performance of the Max G30 is excellent, but you are paying for it with a higher price and heavier weight. Ninebot have cornered the market with their scooters and, unless you do not want to buy from a Chinese company for political reasons, there is no reason not to buy one of their offerings (be it a Xiaomi or a Segway). My main concern is that the weight of the Max G30 is negating some of the benefits of this class of e-scooter. Indeed, I would argue that the G30 is moving into the class of non-portable e-scooters, meaning it being foldable is almost pointless. So it depends on what you want: if you want to replace your whole journey with an electric scooter and that journey is more than 20 miles, the Max G30 is a superb choice. It produces no emissions and will not leave you in a sweat.

YOU CAN BUY THE MAX G30 HERE