The Decent X7 electric scooter is a British variant on the American Turboant X7. It works like this: a Chinese company manufactures a basic model (the X7) and offers it as a "white-label" to Western companies, meaning that these companies can brand and tweak it to their own liking. The company behind the Decent brand has been wholesaling other scooters, such as the Xiaomi 1S, but felt the proliferation of Xiaomi meant they needed a new option. But just how does the Decent X7 compare to other scooters? It is generally priced somewhere between the Xiaomi Essential and Xiaomi 1S but is probably more akin to the 1S in terms of specs.

But let's take a closer look.

The Decent X7 is a foldable electric scooter, first released in 2021. It is a version of the X7 scooter (the scooter behind the Turboant X7) and is similar in specification to the Xiaomi 1S, though there are some important differences. The Decent X7 has a simple folding design, 25 km/h (16 mph) top speed, 25 km range (upgradeable), and 13 kg weight. The battery is stored in the handlebar and can be replaced, either with a battery of the same specification, or an upgraded version. The dashboard displays the speedometer, battery level and riding mode. It is easy to assemble straight out of the box, but there is no app to connect to (which is not necessarily a disadvantage).

The X7's 36V Li-ion battery is located in the handlebar stem (like many of the Ninebot models). It is removable, meaning that you can update the battery if it loses too much of its capacity (after a couple of years) or even upgrade it a higher 42V battery. Although a Decent X7 Pro is yet to be released, the Turboant X7 Pro simply adds a second battery to the stem (in the same way the ES2 became an ES4).

The frame is built from an aluminum alloy, just like the Xiaomi scooters (and most vehicles). This means it is strong but not too heavy. At about 13 kg, it is slightly heavier than the Xiaomi 1S (perhaps its nearest rival), but the extra weight might in part be due to its larger wheels (the tyres themselves are filled with air). The Decent X7 has 10 inch tyres, while the Xiaomi range have 8.5 inch tyres.

The display on the Decent X7 is what you would expect, inasmuch as it shows your speed as well as the battery power and ride mode. The accelerator is a button/switch on the right-hand handlebar, on which the power button and menu button are also housed. In the advertising images above, this switch is red but in actual fact the switch is black in the Decent X7, as shown in the below image. 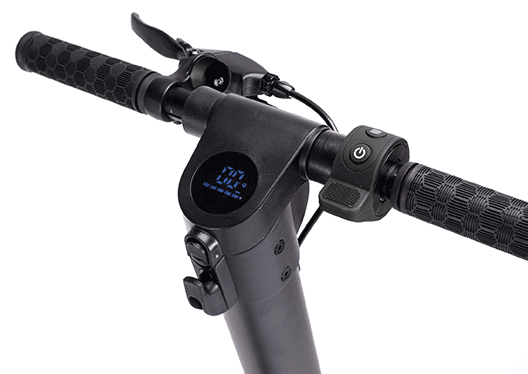 There is a bike-like brake with an in-built bell on the left-hand handlebar. I prefer this kind of brake as opposed to a second electronic switch. The handlebars have honeycomb-patterned rubber grips that screw (and unscrew) into the stem to make for more compact transportation; possibly useful for the luggage rack on a train (though not sure if anyone will be bothered to unscrew them in reality).


The Decent X7 has a headlight and a red rear light (though this does not also function as a brake light like some scooters). It also has side reflectors, where the honeycomb pattern is repeated in a nice touch. These side reflectors conceal the bolts for the wheels, by the way, meaning that they will have to be peeled off (and then stuck back on) should you ever need to remove a wheel.

The Decent X7 feels well-balanced despite the battery being in the stem. I tend to think the base is a better place for the battery but having it housed in the stem does allow for greater ground clearance: in this case, 14 cm (5 1/2 inches). I only ever use the brake on the handlebar rather than the back foot brake (for fear of breaking something that looks like a mud guard). Decent have not provided braking distances but the brake is pretty much the same as the Xiaomis (indeed, it looks like the disc is manufactured by the same company). By the way, if you are not used to riding scooters, the first time you ride any e-scooter will likely be somewhat nerve-wracking. 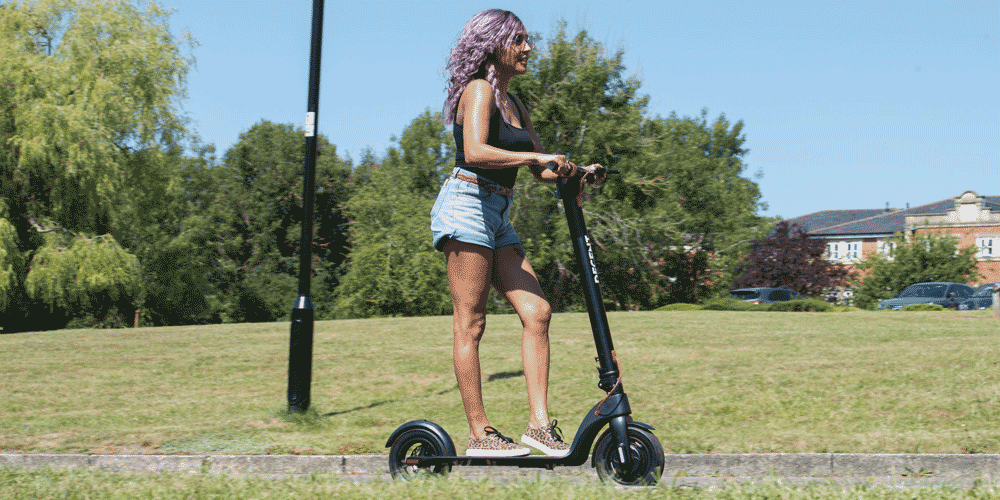 Despite the couple in the advertising material not doing so, we always recommend wearing a helmet when riding an e-scooter; and the majority of e-scooter accidents happen within the first few rides, so be careful if you are a beginner. Although the 10 inch tyres are designed to be safer (eg less susceptible to potholes), they are still relatively small and British workmen seem incapable of laying tarmac that lasts more than a year or two. I mean, seriously, can it be that hard?

The Decent X7 comes with a 36V, 187 Wh, which is fairly average. However, the rated power is 350 Watts, which is above average. I have to admit I am unsure how an average battery can provide above average power (unless it is simply more economical in its conversion). What is apparent is that that the Decent X7 trades range (being lower than the 1S) for real-world power (being slightly higher than the 1S). However, as mentioned, the Decent X7's ability to have its battery removed does give it something of an edge. Imagine how much easier life would be if you could simply (easily) change the battery in your phone.

The Decent X7 gives you everything you could want, except connectivity. However, the lack of an app currently makes little real-world difference but I do wonder if connectivity could be beneficial long term. With the standard battery, the range does not quite match the Xiaomi 1S, but then it is priced slightly lower than the latter; so it depends on how far you plan to travel on any one occasion. I have to say I like the idea of a replaceable battery, seeing as Li-ion batteries have a finite life anyway. To conclude, I would definitely go for the Decent X7 over the Xiaomi Essential, but then it becomes a toss up between the X7 and the 1S.

YOU CAN BUY THE DECENT X7 HERE