Ever fancied a Lamborghini for under £550?

Well, now you can with the Lamborghini AL1 electric scooter! The only caveat being that it's not quite as obvious that you're riding a Lamborghini from a distance when compared to, say, a Lamborghini Countach (yes, I'm that old that the Countach is my go to Lamborghini reference). Anyway, is it worth investing in a Lamborghini e-scooter, as opposed to something like a Xiaomi, or are you paying more for the sexy badge? In this review I take a look at the specs and overall sexiness, and give you my thoughts on the Lamborghini AL1 scooter. So let's dive into some Italian elegance - via a Chinese factory of course.

The Lamborghini AL1 (Automobili Lamborghini 1) is a foldable electric scooter, first released in 2021. It is reminiscent of the original Segway scooters but curves give it an air of Italian chic. The Lamborghini AL1 has a now common folding design, 25 km/h (16 mph) top speed, 25-30 km range, and 13 kg weight (making it comparable to the Xiaomi 1S). The 36 volt battery is stored in the base (unlike the original Segway), while the dashboard displays the speedometer, battery level and riding mode as well as things like Bluetooth connection. There is limited assembly and it can be connected to the AL E-Mobility app, which is actually very good (see below). 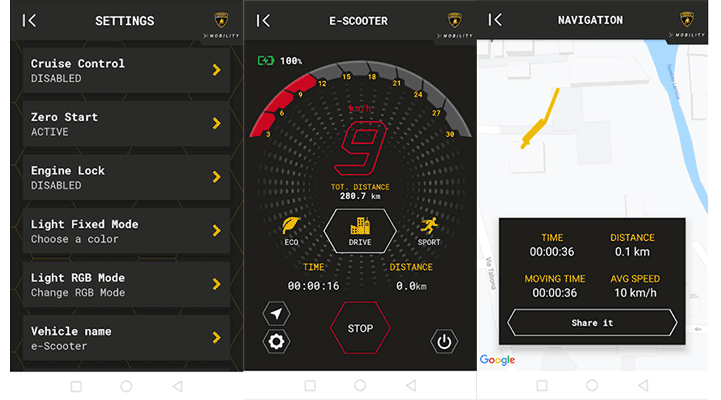 I would normally start with the scooter itself, but for the Lamborghini it's worth drawing attention to the app as it's one of the AL1's outstanding features. Not only do you have cute gimmicks we've seen before, such as ambient lighting choices, but you have a useful map feature (like those found in hire scheme apps), which is missing from most privately-owned scooter apps, such as the Xiaomi app. The semi-circular speedometer - imitating a car - is also a nice touch (though perhaps liable to encourage people to ride as fast as possible regardless of the environment or conditions). So right off the bat, alongside the look of the scooter, you're given a feeling that attention has been paid to the design and connectivity - as you would expect from an electric scooter with Lamborghini's badge.

Electric scooters tend to look fairly similar as there's only so many things you can do with the basic design, and they tend to be manufactured in - and in partnership with - Chinese companies no matter who designs them. However, credit must be given to Lamborghini for designing something which, while conforming to the necessary basics, does look pretty cool. Of course, aesthetics are subjective - I've never been a fan of their cars - but I think most would agree that the Lamborghini AL1 is a sleek beast.


The AL1 frame is built from a magnesium alloy (most frames are aluminium), giving Lamborghini some leeway in terms of weight (as magnesium is 33% lighter than aluminium). There are some other minor advantages to magnesium, but none are really relevant unless you plan to use your scooter for several centuries. At about 13 kg, the Lamborghini AL1 does actually come in slightly heavier than the Xiaomi 1S (its cheaper rival), but the extra weight will in part be due to its honeycomb tyres.


The AL1 has 8 inch honeycomb tyres. Pneumatic tyres tend to be the norm these days: for instance, the Xiaomi 1S has 8.5 inch pneumatic tyres. Honeycomb tyres fall somewhere between pneumatic and solid rubber tyres, being puncture-proof while delivering a smoother ride than solid tyres. However, they are still not as dampening as pneumatic tyres - or provide quite as much traction. To help compensate for the extra rigidity in the honeycomb tyres, the AL1 has front suspension in the form of a suspension coil located (but hidden) at the base of the handlebar stem (rod); another reason why it reminds me of the original Segway ES2. 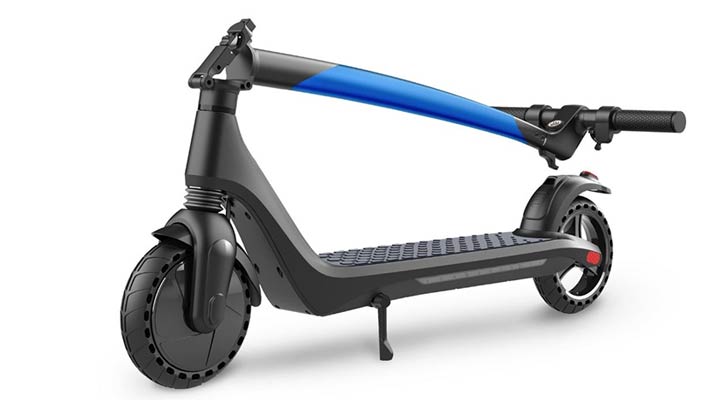 The accelerator (throttle) is a button/switch on the right-hand handlebar, while there is a similar switch for braking on the left. Again, this is reminiscent of Segway, while the Xiaomis have bike-like brakes. I generally prefer the familiarity of a mechanical brake but you rarely need to brake heavily as you generally decelerate quickly after taking your thumb off the accelerator. The scooter is also equipped with a foot brake on the rear mudguard in case you happen to be heading downhill and weigh 100kg (and your electronic brake fails). 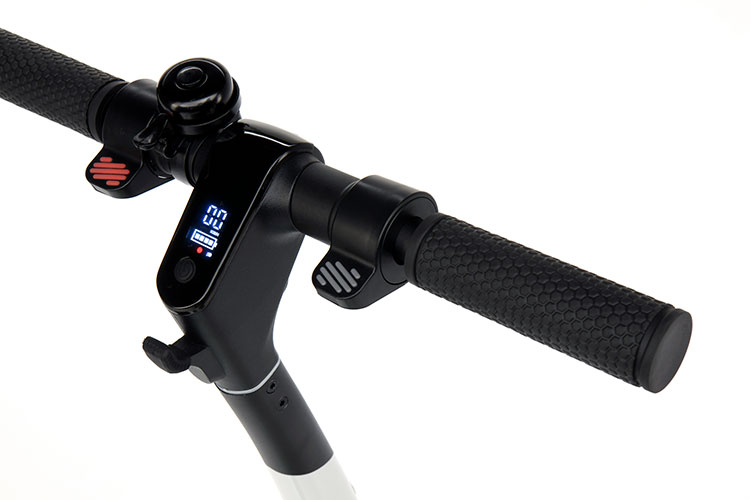 The AL1 has a headlight and rear light, which functions as a brake light too, as well as side reflectors. The headlight is a little unusual in that it is angled downwards, whereas most scooter headlights point straight ahead. The thinking must be that it is better to see clearly what is a few metres in front of you rather than provide for a greater range. It also lowers the likelihood of blinding drivers (though one of you would have to be on the wrong side of the road or going the wrong way down a one-way street). As mentioned, there is also an ambient light, which spreads a colour of your choice on the ground around your scooter: a gimmick borrowed from Segway.

There's minimal difference between the smoothness of the ride when comparing well-made scooters, such as this and the Xiaomis. Some swear pneumatic tyres are better than suspension, others that suspension is better than pneumatic tyres. Like most new scooters, the AL1 offers three different speeds - but who uses anything but the top speed? The app is a real bonus: though it's quite possible to ignore it and just ride your scooter without having to know where you have been and at what speed, it's nice to have the option to waste some time looking at your journey. Everything seems to work as intended - though the acceleration is not as good as the Countach.

Yes, I'm sticking with that reference.


I often mention with scooters where the battery is housed in the base that there is a relatively low clearance - ie the gap between the ground and the bottom of the base. The AL1 is similar to the Xiaomis in that regard. The base may be slightly thinner but the wheels are also slightly smaller, so it equates to a similar clearance and you have to be careful not to scrape the bottom the base on the edge of the curb when going from pavement to road or vice versa. Not that you should be riding on the pavement of course. 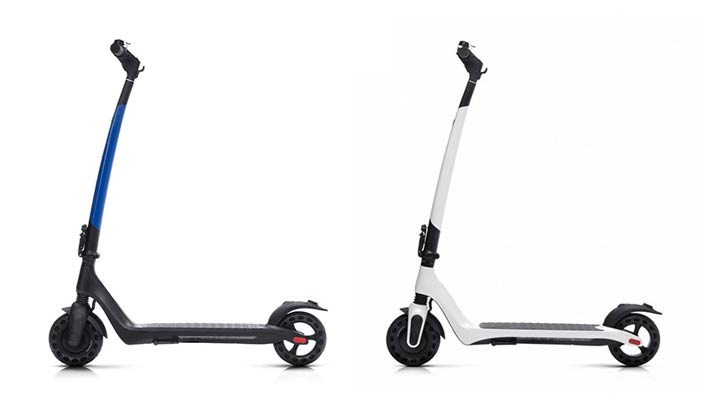 One small benefit of the Lamborghini AL1 over a scooter such as the Xiaomi 1S is its greater water resistance. The Lamborghini is rated at IPX5, which means it is able to resist a sustained, low-pressure water jet spray. The Xiaomi 1S has a rating of IPX4, which means it is resistant to water splahes from any direction. This simply means you're less likely to have issues when riding in the rain or cleaning your scooter; but after three years of selling e-scooters, I am yet to hear of anyone having suffered loss of power from water damage.

As mentioned, the 36 volt battery is located in the base. This means that it is not easily changed or upgraded. The battery provides 7.8 Ah and consequently 280 Wh, which is above average. The rated power of the motor is 350 Watts, which is also above average. Lamborghini states a maximum climbing angle of 12%, which seems like an underestimate considering the power supplied by the battery/motor. Indeed, I would expect the range to be slightly longer with the capacity too. It could be that Lamborghini are being more realistic (truthful) with their figures having been required to follow stricter regulations when providing specifications for their cars.

There is much to like about the Lamborghini AL1 and its style will surely appeal to those looking for something a bit different. But the main question is whether the AL1 is value for money. As magnesium is about twice as expensive as aluminium, it's possible that the extra cost of the AL1 is down to the frame as much as anything. One could of course argue that magnesium does not offer that much benefit and is more of a way for Lamborghini to differentiate itself when there are limited ways with e-scooters to do so.

So it's hard to say if you are paying a slight premium for the Lamborghini name (or their determination to offer something different) or not. What I can say is that, in my view, Lamborghini have got nearly everything right: I would just have slightly bigger wheels (by 5-10%) and maybe even rear suspension. If price is your main concern, perhaps go for a Xiaomi or similar; but if you want something that looks great (and to be able to boast about your magnesium frame) or if you want to have a more useful app, then you may want to pay the extra and go for the Lamborghini AL1.

It really depends what's important to you.

YOU CAN BUY THE LAMBORGHINI AL1 HERE