REVIEW OF THE MI ELECTRIC SCOOTER 3

Xiaomi have released the specs of their new electric scooter, simply named the Mi Electric Scooter 3. But how does it differ from other Mi scooters and is it worth buying? As it is not expected to be available in the UK/Europe until August 2021, this is more of a preview based on the specs and marketing images, and having ridden the other Xiaomi scooters of course (such as those in the previous new range of scooters). You can also directly compare specs of the Mi 3 with the 1S and Pro 2.

The original Xiaomi M365 e-scooter was released in 2016. Then came the M365 Pro in 2018, followed by the Essential, 1S and Pro 2 in 2020. The differences between the scooters have generally been small, but the new range was an overall improvement, with better tyres, dashboards, brakes, and battery economy; so it was safe to assume the Mi 3 would see small improvements.

The Mi 3 is a foldable electric scooter designed by Chinese tech giant Xiaomi and manufactured by Ninebot. Like the 1S (its closest predecessor), the Mi 3 has a simple folding design, 30 km (18 mile) range and 25 km/h (16 mph) top-speed. It also boasts cruise control, front and rear lights, E-ABS brakes, phone app (Mi Home app below) and pneumatic tyres. The frame is also the same as the 1S.

The handlebar height is not adjustable because of the folding system (part of the bell hooks on to the rear mudguard). It comes in a bespoke white/black box and requires a small amount of self-assembly, inasmuch as you have to insert the handlebars and screw in four screws to fix them in place (so as to avoid an awkwardly large box for shipping). The box also includes a spare tyre.

The scooter's battery is located in the base and the frame itself is built from an aluminium alloy like most e-scooters. At 13.2 kg, it is slightly heavier than the 1S but, as you are not paying for a carbon fibre frame, it would be churlish to complain about the weight. Unlike the 1S, but like the original M365, Xiaomi have introduced a second colour: in this case an off-white they call "grey".

The yellow reflectors remain from the 1S, but a dash of blue has been added, with the wires and brake. At some point, Xiaomi will go to the trouble of hiding the wires within the frame but the current folding mechanism does not allow for it. The display on the Mi 3 appears to be the same as the previous range: it shows your speed, battery level and mode (Standard, Pedestrian or Sport). Pedestrian mode limits your speed to 5 km per hour (ie walking speed); presumably so you can ride on pavements without killing people. Standard mode limits your speed to 20 km/h, meaning you that you have to be in Sport mode to reach top speed (25 km/h).


The accelerator is a button on the right-hand handlebar, while there is a bike-like brake on the left, as well as a slightly superfluous bell (which cannot be removed if you want to fold up your scooter). A powerful LED light is built into the front of the handlebar.

As the frame and tyres appear to be the same as the 1S, one can assume it will feel very much like that scooter. With the 300W output found in the Pro 2, one might expect there to be more powerful acceleration. However, I expect firmware will limit the acceleration in the same way it limits speed; meaning the extra power in the Mi 3 will only be useful when going up inclines.

All the Xiaomi scooters are well-balanced and easy to control (as long as you have both hands on the handlebars). With a low centre of gravity, accelerating and braking are easy and effective. Having said that, the low centre of gravity - with the battery located in the base - is offset by a comparatively low clearance, meaning there is tendency to scrape the bottom on pavement edges when pushing the scooter from the pavement to the road or vice versa. If you are not used to riding scooters or skateboards, the first time you ride any e-scooter is likely to be a little nerve-wracking (and most accidents happen within the first ten rides). 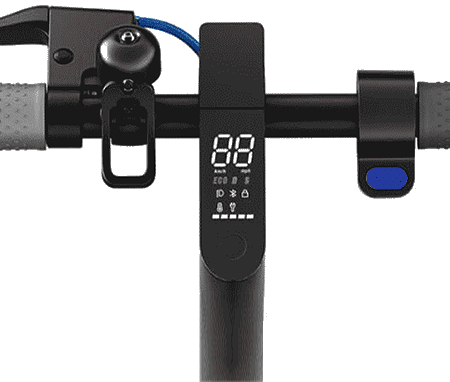 On a side note, the UK government's insistence that electric scooters be trialled with city centre hire schemes before private owners are allowed on the roads is completely counter-intuitive. The idea that the first time you should ride an e-scooter is in a busy city, with heavy traffic and when you are much less likely to have a helmet to hand, rather than in your own residential street at a time of your choosing and with your own helmet, is clearly absurd. It is a classic knee-jerk reaction to the death of one private owner.


The Xiaomi tyres are 8.5 inches in diameter and pneumatic. The idea is that air-filled tyres makes the ride smoother. However, there is no suspension so it is really a trade-off between the two options. The ride is indeed smooth as long as the ground itself is reasonably level. I have ridden Xiaomi scooters extensively, and found that, as long as major potholes are avoided, and a comfortable riding stance taken, most road surfaces can be traversed without issue. Cobble stones are something of a nightmare.


I recommend customers wear a helmet when riding an e-scooter. Most scooter injuries seem to happen when a pothole (or similar) is encountered and the smallish wheels are indeed susceptible to such obstacles. Please read my post Are Electric Scooters Safe? for more information and statistics on the safety of electric scooters. As of July 2021, it is still not legal to ride privately owned electric scooters on public roads in Britain, although few police forces outside of London take much action.

The battery in the Mi 3 seems to be based on the 1S, but the specs promise an increased power output. In truth, the publicised numbers are not quite adding up across the Xiaomi range now. For instance, as the Mi 3 has an equal power output to the Pro 2, one would expect it to have at least as good a climbing ability as the other variables would seem insignificant; yet it is inferior. It's possible that, as with some other e-scooter manufacturers, Xiaomi have amended how the calculate the specs - and are trying to give more accurate numbers for real world conditions. Of course, this would mean that all previous models over-promised (and they generally did to a small degree).

Xiaomi claim they have improved battery efficiency further, but give only one example (a sleep mode when the scooter is left on). It is hard to know whether the hardware has been improved, but Xiaomi do tinker with the firmware. For instance, the Pro 2 does not use up the battery's full capacity (charging instead to about 93% despite the app saying it is at 100%). This trick helps increase the battery's lifespan (according to people who know about batteries ). Expect performance to drop once the battery level falls below 5%.

The Xiaomi Mi Electric Scooter 3 falls somewhere between the 1S and Pro 2 - and will be priced accordingly - but is closer to the 1S. As with the previous versions, there are small improvements and trim changes. When all is said and done, it will be a great runaround and suitable for most people. It may indeed be worth spending the extra money if you are torn between the 1S and the 3, but the only significant difference in the ride is likely to be the greater hill-climbing ability of the Mi 3; so perhaps it comes down to the number of hills you are likely to encounter. I detract a quarter star for it being so similar to the 1S and for the increasingly inane nomenclature.

YOU CAN BUY THE XIAOMI MI 3 HERE