The American company Jeep, famed for its all-terrain vehicles, has entered the electric scooter market with the 2XE Urban Camou. It took me a while to work out that "camou" was short for "camouflage" and thus pronounced "cammo" (despite the scooter sporting a camouflage aesthetic); but perhaps my obtuseness was down to the contradiction: camouflage being of little use in the city. Anyway, once I got over the name, it was time to assess the Jeep scooter; especially in comparison with the similarly priced Ducati Pro III. 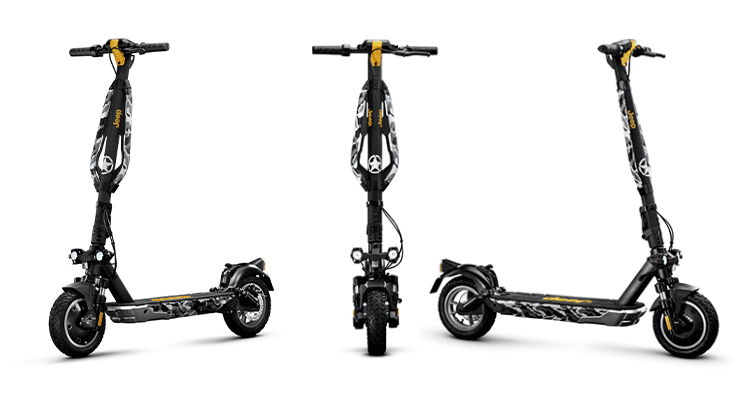 The Jeep 2XE Urban Camou is a foldable electric scooter with a magnesium alloy frame, the usual 25 km/h (16 mph) top speed, a 45 km range, and 19 kg weight. Although there are some differences, the similarities with the Ducati Pro II Evo suggest both are manufactured by the same company (and there is coordination between Jeep, Ducati and Lamborghini); though the Ducati Pro III is perhaps a more comparable scooter in terms of price and performance. As with the Ducatis, the battery is housed in the base; and the dashboard is almost exactly the same as the Pro II Evo. It is easy to assemble out of the box, and there is the well-made Jeep e-mobility app.

As with the Ducatis, the 2XE uses a magnesium (instead of an aluminum) alloy, which differentiates high-end scooters from others (like the Xiaomis). The main benefit of using magnesium is that it is about a third lighter than aluminium; however, at 19 kg, the Jeep 2XE is comparatively heavy. Magnesium is also more environmentally friendly, but does add extra cost to the scooter.


The 2Xe has 10 inch tubeless tyres, which I would suggest is what you want for a top-range urban scooter. The braking and suspension is the same set-up as that on the Ducati Pro II Evo (though there is an additional reflector on the Jeep's front wheel), meaning that there is additional suspension to compensate for the tubeless tyres and give the rider a smoother ride.

The most obvious difference between the Jeep and the Ducatis (and other e-scooters) is the handlebar stem, which has a kind of lateral reinforcement with camouflage trim (shown below). I'm not convinced this supplies any real structural strength, and can see no obvious advantages, so think when all is said and done it must fall under the aesthetic/gimmick category. So it depends on whether you like the look of it or not. But it adds to the chunkiness of the scooter, as well as the weight. There is of course also the Jeep's star-in-a-circle emblem on the stem too (which reminds me of Action Man, and Telly Savalas in The Longest Day in equal measures).

The Jeep 2XE's handlebars and dashboard are very similar to those on the Ducati Pro II Evo; but that is no bad thing. For instance, the Jeep's 3.2 inch LED screen shows: (1) the current speed; (2) the battery level as indicated by the seven bars; (3) total distance traveled; (4).current trip distance; (5) headlight indicator; (6) which of the four modes is being used; (7) cruise control; (8) Bluetooth indicator. 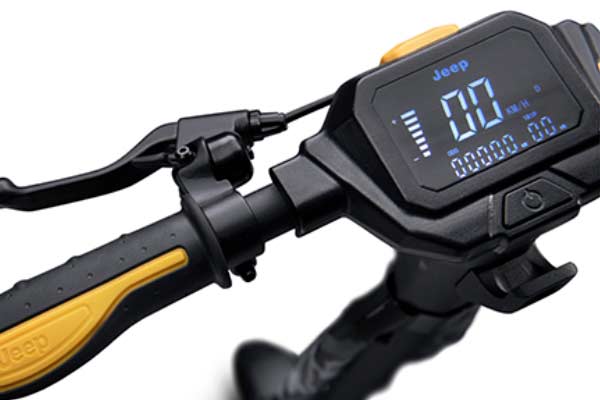 You can see a splash of yellow in the handlebar grips, which differentiates the Jeep from the Ducatis but otherwise the 2XE has the conventional set up: on the left-hand handlebar is a bike-like brake (with in-built bell), while the accelerator is the usual button on the right-hand side. But just when you thought this scooter was Ducati Pro II by another name, Jeep threw in another curve ball... 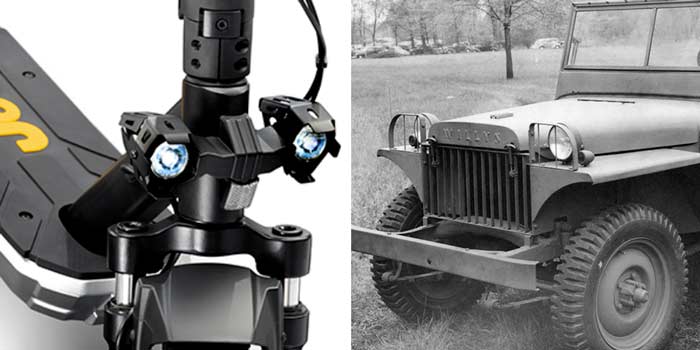 The Jeep 2XE has two headlights instead of the usual one. Not only that, but they are not integrated into the handlebar stem, being somewhat external. This seems like a nod to Jeep's beginnings, and I include an image from the original WWII Jeep (known as Willys) with its external headlights for comparison. So what could be considered a gimmick could also be considered a nice touch.

The Jeep e-Mobility app is essentially the same as the Ducati and Lamborghini apps, which is a good thing. For instance, you have a useful map feature (like those found in hire scheme apps), which allows you to track your rides as well as locate your e-scooter (should you forget where you left it). I always like to see the old-school speedometer in an app. 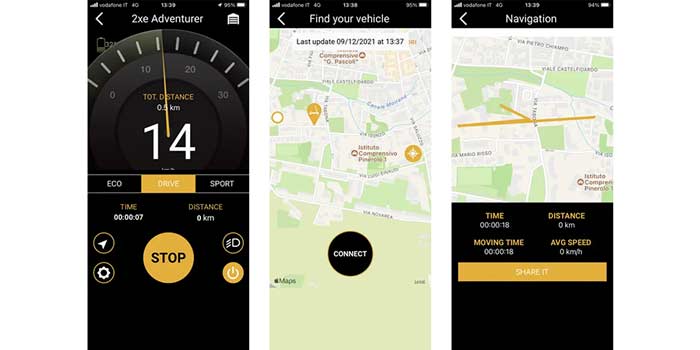 The Jeep 2XE battery is a little unusual inasmuch as the voltage is comparatively high at 48 V, while the ampage is relatively average at 9.6 Ah. This provides 461 Wh overall, which is similar to the Ducatis. However, the rated motor power is a whopping 500 W on the Jeep, which means the Jeep is significantly more powerful than the Ducatis. But how does this all play out in the real-world I hear you cry.

Well, firstly, that extra power will not give you more speed unless you are going up hill because e-scooters are generally limited to a sensible 25 km/h (and if you want to travel faster I suggest you get a different form of transport rather than hack the firmware and put yourself and others in danger); but it will allow you to travel up a steeper gradient (it's a Jeep after all). The 461 Wh gives you a 45 km range, which is very decent but less than the 50 km range provided by the Ducati Pro III.

So the real question is whether the Jeep 2XE is preferable to the Ducati Pro III, which currently retails £30 cheaper. My feeling is that the cheaper Ducati is probably a better buy unless you expect to encounter many hills, or a particularly steep hill, on your journey, at which point the extra power provided by the Jeep will certainly be useful. Otherwise, the Ducati seems to have more advantages over the Jeep. There is nothing inherently wrong with the Jeep, though its weight counts against it for me: at 19 kg it is hard to see many people wanting to carry it. Of course, you may prefer the look of the Jeep 2XE (or be engaged in urban warfare).

YOU CAN BUY THE JEEP HERE