Since the tragic death of YouTuber Emily Hartridge, when she collided with a lorry while riding an electric scooter in London in July 2019, there has been an increase in interest in the safety of electric scooters (e-scooters) both by the public and the authorities. My immediate thoughts on the announced "crackdown" on e-scooters were that it was done before a coroner had reviewed Ms Hartridge's accident and that, when cyclists die in road accidents, the inclination is not to blame the bicycle (but rather the larger vehicle). Of course, I love electric scooters and we sell both the Xiaomi M365 and the Ninebot-Segway ES2, so my instinct is to defend them but let us look at the available data at the time of writing (27/8/19) to see what it says - and try to consider the safety of e-scooters impartially.

It is important to represent data truthfully and accurately. News outlets (or any website) can make misleading claims. For instance, this Business Insider article led with the headline "Electric scooters were to blame for at least 1,500 injuries and deaths in the US last year". However, the author was citing this article by Consumer Reports (the equivalent of Which? in the UK), which stated only that there had been over 1,500 confirmed injuries plus four confirmed fatalities; so to write a headline in which "injuries and deaths" are grouped together when the deaths comprise only 0.26% of the statistics smacks of sensationalism.

There have been two surveys undertaken to compare the number of injuries with the number of e-scooter rides, both in America and both covering scooter hire schemes (such as Lime and Bird). One is this Austin report, which analysed nearly one million scooter rides over nearly three months. The second report covered 120 days in Portland, Oregon, and covered 700,369 known trips.


The Austin survey found that 1 in 5,000 scooter rides involved an injury. The Portland survey suggests it could be as high as 1 in 4,000 trips but did not determine whether the injuries recorded were actually suffered within the known trips (riders may have been injured on personal e-scooters rather than on hired scooters) so cannot be considered as robust. One of the most interesting findings of the Austin report is that two-thirds (65%) of the injuries were suffered by inexperienced riders (those who had only ridden an e-scooter 0-9 times). Both reports also found that about 83% of accidents did not involve another vehicle, supporting the theory that a lack of riding experience is often to blame (as most riders are coming off their e-scooters rather than being involved in a collision).


Perhaps the most striking finding was that only one of the 190 people injured in Austin was wearing a helmet, suggesting that if you wear a helmet you could ride twice-a-day for over 1200 years and expect to suffer only one injury. In truth, this finding suggests a problem with the data: a helmet in itself cannot account for a near 200-fold decrease in the likelihood of injury (when the injury can occur anywhere in the body). The most obvious explanation is that those who wear helmets are more careful generally and thus less likely to suffer injury. Another explanation could be that helmet-wearers are more confident riders and this lowers the risk of injury. The Portland report did not record whether or not the injured e-scooter riders were wearing helmets: only 3% were known to be wearing one.


Number of Rides Before Injury in Austin 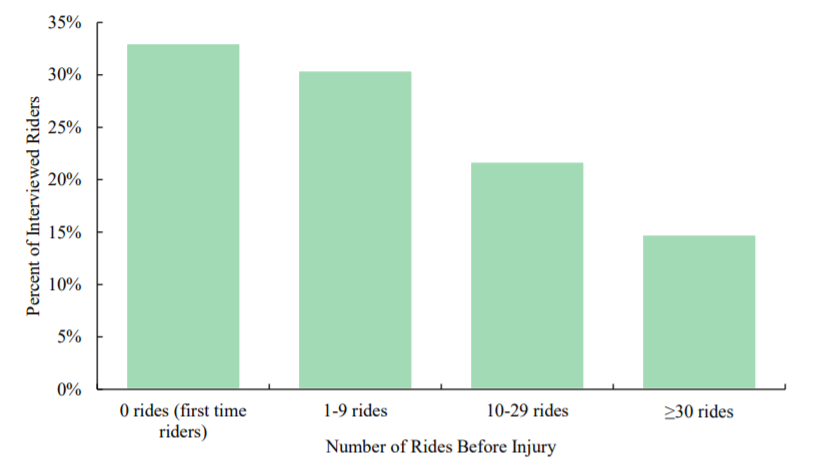 There were no deaths reported in either survey (covering over 1.6 million trips). According to the National Association of City Transportation Officials, there were 38.5 million e-scooter trips in the US in 2018, while there were four e-scooter fatalities (none of the riders were wearing a helmet and all are known or suspected to have been hit by a motor vehicle - with one resulting in the imprisonment of a heroin-taking driver). This means that there was approximately one death for every 9.6 million rides. There are 945 million cycle rides a year in England, while there were 18,500 cycling injuries and 92 deaths in 2016 (figures for 2017/18 are expected to be similar). That equates to one injury per 51,100 bicycle rides and one death per 10 million bicycle rides.


This suggests a greater chance of injury (by a factor of 10) riding an e-scooter compared with riding a bike but not much difference (6%) in the risk of death. The discrepancy between the increased risk of injury against fatality is somewhat anomalous: it suggests that you are less likely to die if you are injured riding an e-scooter despite being less likely to be wearing a helmet. One explanation for this may be the greater ability for an e-scooter rider to jump off their e-scooter - to relative safety - when they are involved in a collision.

As tragic as Ms Hartridge's death was, it does not tell us anything about the relative safety of e-scooters. It only tells us that it is possible to be killed while riding an electric scooter. It is also possible to die while walking in London (58 pedestrians were killed in the city in 2018) and no-one is suggesting confiscating footwear. When comparing the statistics, as far as fatalities are concerned, e-scooting is found to be only 6% more dangerous than cycling despite the fact that e-scooter riders are much less likely to wear helmets. There seems to be more likelihood of non-fatal injury so it is fair to say that, currently, e-scooters are more dangerous than bicycles.


Indeed, the results could be explained entirely by the difference in helmet-wearing rates. I believe that (as with cycling) safety education and perhaps a law enforcing the wearing of helmets would be a better solution rather than the confiscation of e-scooters (surely the police have better things to do). It is obvious that something needs to be done about the traffic and air pollution in British cities, especially London, and e-scooters have been shown to lessen the number of car journeys taken and thus decrease air pollution.


More detail and explanation can be found in the longer post Are Electric Scooters Safe?