Italian company Ducati are well known for their high performance motorbikes; but the Bologna-based company have ventured into electric scooters under their Urban e-Mobility brand. The Ducati Pro III, along with the Pro II Evo, is one of the newer additions to that range, but has the excellence in motorbike manufacturing transferred to its electric scooters, especially the Pro III ? Let's take a look!

The Ducati Pro III is a foldable electric scooter, currently the top scooter in the Ducati Pro range. Being the best and chunkiest in the range, they are also the most removed from the Ducati Pro I, which was basically a Xiaomi by another name. The Pro III has the usual 25 km/h (16 mph) top speed (as this is the speed most countries think e-scooters should be limited to), a 50 km range, and 17.5 kg weight. The battery is in the base, while the dashboard displays an array of information, including an odometer, making it reminiscent of a motorbike dashboard. It is fairly easy to assemble straight out of the box, and there is the well-made Ducati app to connect to.

As with the Ducati Pro II Evo, the Ducati Pro III uses a magnesium (instead of an aluminum) alloy, which is one of the ways high-end electric scooters differentiate themselves. The main benefit of using magnesium is that it is about a third lighter than aluminium; but at about 17.5 kg, the Pro III is relatively heavy. Magnesium also adds extra cost to the scooter. As mentioned in the Pro II, magnesium is also more environmentally friendly becuase it can be made from sea water . The Pro III has 10 inch tubeless tyres.


Aesthetics is subjective of course. In comparison to the rest of the range, and most e-scooters, there is definitely a certain chunkiness to the Pro III. The front suspension is different from the Pro II Evo, being a single (hidden) coil following on from the stem (much like the one found in the Lamborghini AL1), while the rear suspension is hidden behind housing. The stem is also rounder than that of the Pro II. All of which adds to that chunky feel. Then there is of course the Ducati branding, and red and white stripes. 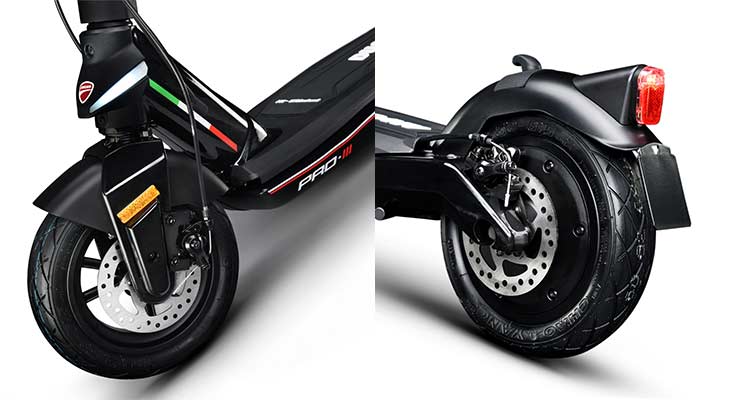 As mentioned above, the display on the Pro III (as with the Pro II Evo) differentiates it from most e-scooters on the market; which you may perhaps expect at this price level. But Ducati have gone even further with the Pro III. Pictured below, this 3.5 inch LED screen shows everything that the Pro II does (please see the Pro II review for more), but you may also notice the bright red key fob (or radio frequency key). This key unlocks the motor, which is necessary to ride the e-scooter. The Ducati phone app can also be used to unlock the scooter (see more about the app below). As well as this added security feature, there is a built-in USB port should you wish to charge a device. 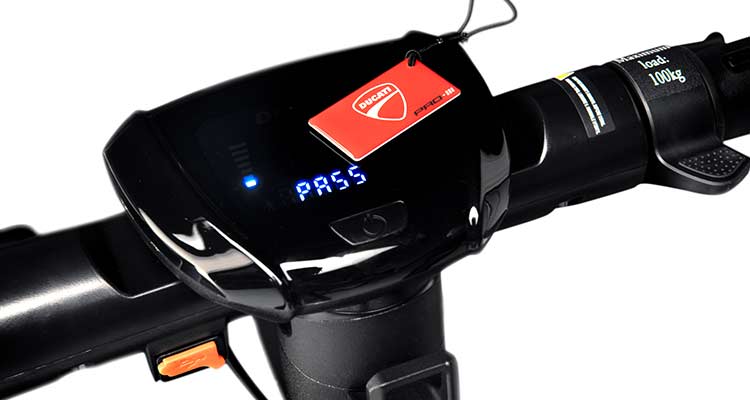 You may also notice in the image below that the Pro III has two brake levers; which means that there is brake disk on the front wheel (controlled by the right lever) as well as the rear wheel (left lever). This is unusual in the world of e-scooters (which normally have a built-in electronic brake on the front wheel to stop the scooter acceding the speed limit) and is of course copied over from motorbikes.


The handlebar grips are nicely moulded and branded. The accelerator is the usual button on the right-hand side. The Pro III has a headlight and a rear light. Unlike the Pro II Evo, the headlight is in the normal e-scooter position at the top of the stem. 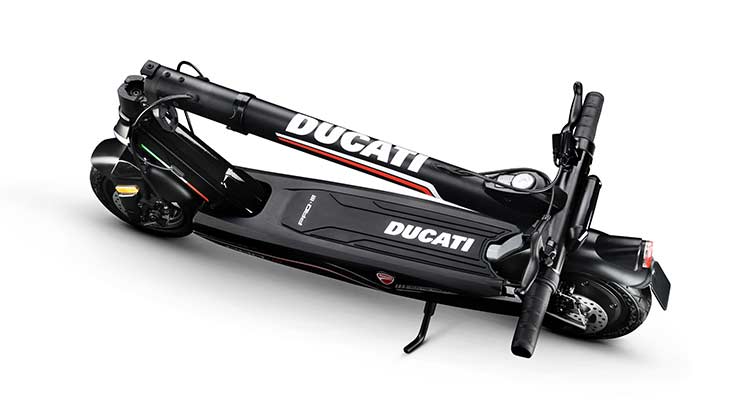 As with the Ducati Pro II Evo, the combination of 10 inch pneumatic tyres with front and rear suspension makes for as smooth a ride as you can expect from an e-scooter. It's clear that Ducati's experience in motorbikes has been brought to bear on their e-escooters. For instance, Ducati are keen for users to keep their tyres at the right pressure (44 PSI) in their scooters whereas most brands ignore this.


Ducati have not provided braking distances but it's perhaps worth pointing out that, although having front and rear mechanical brake provides more control, the rider should keep in mind that using only the front brake while traveling at speed could cause you to "go over the handlebars". Unless you are an experienced rider, I would suggest you rely more on the rear brake than the front brake. By the way, if you are a complete novice rider, the first time you ride any e-scooter will likely be somewhat nerve-wracking.


So please take it easy to begin with. We always recommend wearing a helmet too.

The Ducati Urban e-Mobility app is the same as Lamborghini's AL e-mobility app; and excellent compared with what mid-range e-scooters like the Xiaomis offer. For instance, you have a useful map feature (like those found in hire scheme apps), which allows you to track your rides as well as locate your e-scooter (should you forget where you left it). The semi-circular speedometer - imitating a motorbike - is a nice touch (though perhaps liable to encourage people to ride as fast as possible regardless of the conditions). 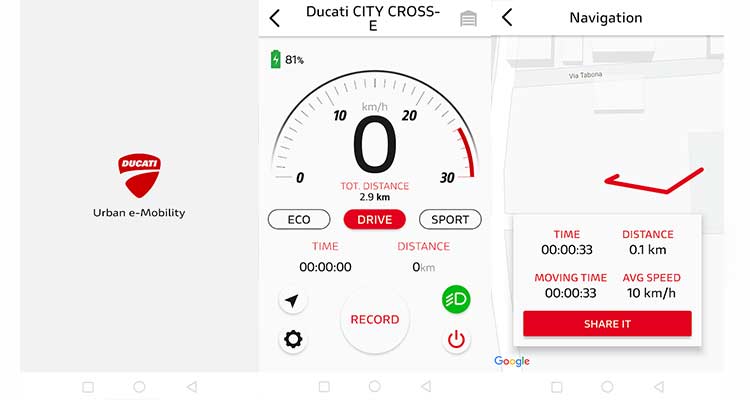 The Ducati Pro III comes with a 36 V, 13 Ah battery providing 468 Wh, which is pretty stonking, and provides for the mammoth 50 km range (and accounts for the chunkier feel to scooter). The rated motor power is 350 Watts, which is good. Of course, as scooters speeds limited artificially to comply with real (or tacit) road laws, there is no need to go crazy with the motor power. 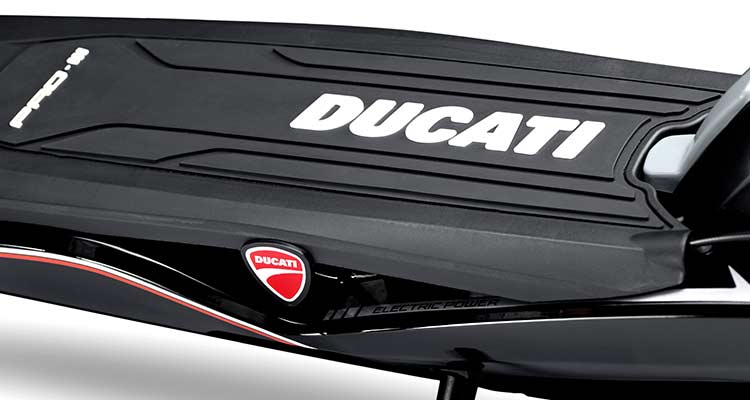 So the Ducati Pro III is clearly a high-spec scooter with all bases covered. It then becomes a question of the cost, and whether the extra outlay is worth it; especially in comparison to the Pro II Evo. The main advantage is the extra 10 km range. After that, I like the key fob and the extra security this provides. The USB port could come in handy if you are commuting on a daily basis for sure. Whether or not these are worth the extra (currently) £150 depends on your own personal needs. If the extra cost is acceptable to you, and you like the look of the Pro III, there's no reason not to get it; unless you are expecting to need to carry your e-scooter up lots of stairs.

YOU CAN BUY THE DUCATI PRO III HERE