Below is a video of me unboxing the UK/EU version of the Xiaomi M365 e-scooter. You can also watch it directly on YouTube here. Although I had been riding M365s for more than a year in Paris and Mexico City, and had been selling them for a few weeks before I made this video, I had never actually unboxed one. Hence my comical lack for foreplanning. It took me a while to complete this unboxing video because I noticed the greenscreen had a gap in it the first time and had to redo the second half (after the scooter is unboxed).

What Do You Get In The Box?

As the unboxing video above shows, when you buy the EU/UK version of the M365 electric scooter you get: the e-scooter itself; the spare tyres (I am yet to open this box); the power cable (with transformer); the manual; the air hose (I believe this is the proper name for the tube); the screws and Allen (aka alum) key for attaching the handlebars to the handlebar stem. The scooter was about 50% charged.

As mentioned in the video, perhaps the first thing you want to do after unboxing your e-scooter is connect it to the Xiaomi Mi Home app. This works via bluetooth and means you have to be within bluetooth range. Below are two screenshots from the app. As you can see, the app will tell you the current battery level, the average speed of your current trip and the total range of your trip. As explained in this post, if you buy a Xiaomi e-scooter and are asked to connect to a different app, such as the MiniRobot, it means you have been bought a fake. 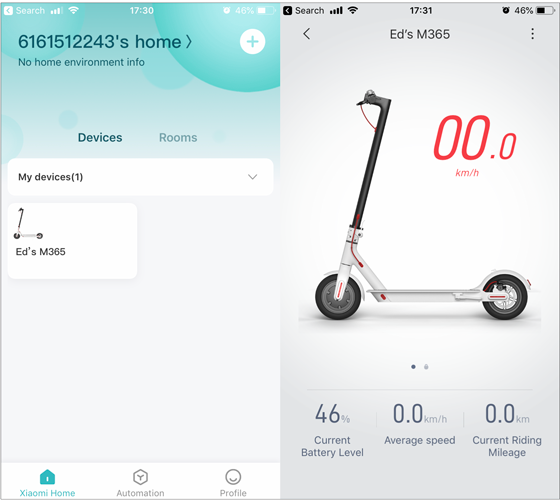