The original Ninebot-Segway ES2 Kickscooter was released in late 2017 but only came to people's attention in Europe when electric scooter hire company Lime put 1000s of them on our streets. It fared less well in the private ownership market due to the success of the cheaper Xiaomi M365, but Ninebot has now released two new versions of the ES2 - without really telling people. The new models are the E22E and the E25E, with the E25E being the more comparable version. Incidentally, in China, they are called the E22 and E25 so the second , annoying "E" must refer to Europe or something (it is the E25D in Denmark). The real question is whether it is worth buying an E25E. Perhaps most importantly, should you go for the E25E over Xiaomi's cheaper equivalent, the Xiaomi 1S?

The Ninebot-Segway E25E is a foldable electric scooter designed by Segway, the American brand that was bought by Chinese firm Ninebot (hence the double-barreled name) in 2015. It is based on the original ES2 and looks almost identical, though is slightly bigger. To confuse matters, Ninebot actually manufactures the scooters for Xiaomi too. Although Segway had a heads-tart on both Ninebot and Xiaomi, and had claimed copyright infringement against Ninebot before being bought out by them, it now feels to me like Segway is little more than a brand name that Ninebot will eventually ditch once its own name is well enough known in the West.

The E25E has a simple folding design, 25 km (16 mile) range, 25 km/h (16 mph) top-speed, 14.4 kg weight and front shock absorber. An extra battery (fitted to the handlebar stem) will turn the E25E into an E45E and extend the range to 45 km (28 miles) and top speed to 30 km/h. It also boasts cruise control, lights, electronic and foot brake, speedometer and a dedicated phone app (seen in the image below). The app for the Ninebot-Segway is definitely better than the app for the Xiaomi, providing journey information.

The E25E's Li-ion battery is located in the handlebar stem (whereas the Xiaomi batteries are located in the base). This means that a second battery can be added to E25E, extending its range and speed, which is perhaps the main advantage of the E25E over the Xiaomi 1S. The frame itself is built from aluminum (or an alloy thereof). It feels very strong and the folding mechanism means it can be folded or unfolded in about three seconds. At 14.4 kg, the E25E is a full 2 kilograms heavier than its predecessor and the Xiaomi 1S. For me, this is where the E25E is let down most - I just cannot see why the extra weight was necessary.


Heaviness is of course relative and subjective, and it depends on how you want to use your scooter, but I feel the extra two kilograms makes a difference. The 12.5 kg ES2 was already reaching the limit of what I would want to carry for more than a short distance. Having said that, the folding system on the E25E is the same as the ES2, so you can pull it along like this gentleman is pulling the ES2. Ninebot (or Segway) have done away with the ambient light, which was more of a gimmick than anything.

The display on the ES2 used to be what set it apart from Xiaomi's M365. However, a speedometer is now standard on e-scooters and the display on the E25E (with the speedometer, battery power, mode etc) is now pretty standard. The accelerator (throttle) is a yellow button/switch on the right-hand handlebar, while there is a grey brake button/switch on the left-hand side (see picture below). I have to admit I feel a bit safer with the more familiar bike-like brake on the Xiaomi scooters, but the E25E brake works well. The E25E has a headlight (seen below) and a rear light (whereas the ES2 only had a rear reflector). It also has side reflectors elsewhere. 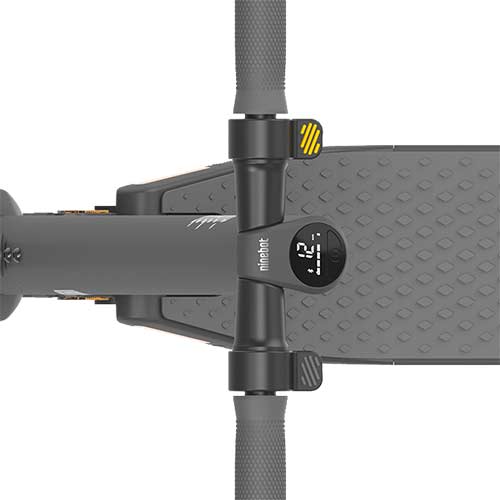 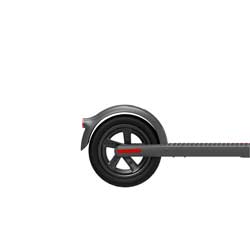 The E25E is well-balanced despite the battery being in the stem (perhaps helped by the extra weight). I tend to think the base is a better place for the battery but I actually prefer the look of the E25 over the 1S, and having the second battery option necessitates the E25E battery be housed in the stem. I only ever use the electronic brake on the handlebar (rather than the rear foot brake) and have not tested the braking distances. Incidentally, if you are not used to riding scooters or skateboards, the first time you ride any electric scooter will likely be a little nerve-wracking. I always recommend wearing a helmet when you ride an e-scooter. 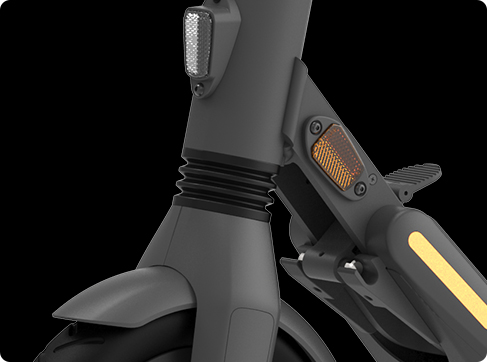 The E25E wheels are 9 inches in diameter, making them larger than the ES2 and Xiaomi range. They are described as "flat-free" but not solid. Basically, they have a foam-like rubber inside that Ninebot claims simulates pneumatic tyres. Honestly, the jury is still out on how good these are. However, it is worth noting that the E25E has a front shock absorber to help compensate for any roughness. This is somewhat confusing, considering the E22E has the same tyres but no shock absorber: if the E25E needs a shock absorber, why does the E22E not? Most scooter injuries seem to happen when a pothole (or similar) is encountered and the slightly bigger tyres help (slightly).

The E25E installed battery is 5960 mAh and produces 300 Watts of power. This is comparable to the ES2 and allows for the same performance, which is generally good despite the range being less than that of the Xiaomi 1S. As noted above and below, the extra battery extends the range by 20 km and top speed by 5 km/h. The efficiency of the E25E's battery means it has a relatively short charging time of 3 hours (though this is doubled if you are also charging a second battery).

The E25E is a very good electric scooter but I detract half a star because I feel it is slightly too heavy for a performance that equals the ES2 and 1S. But perhaps the biggest question is whether or not it is worth spending the extra money on an E25E or buying the cheaper Xiaomi 1S. The benefits of the E25E over the Xiaomi 1S are mostly down to the superior app and the ability to extend its speed and range with an extra battery (turning it into an E45E). The drawbacks are the aforementioned weight and extra price.

YOU CAN BUY THE E25E HERE